マレーシアのイベントにゲストで出た際の事を下記の通り書きました。
（世界の皆様から心配されたのもあり、英語で書きました）
色々大変な事もあり、ご心配くださった皆様には感謝です、そして、お世話になった皆様には心より感謝です…！As already many dear friends recognized and sent me messages about that, I have been safely back to Japan from Malaysia.
I was detained by Malaysian immigration during convention, and now finally released. You can see below statement from Organizer ( Geek Summit オタクサミット / WCS Malaysia) to see what happened in detail.
*Official Statements from Organizers*
Fistly I would like to say big thank you to all who made much effort to release us earlier, Japanese/Spanish Embassy, Organizers, WCS members and all dear frineds who worried us….thank you so much for everything.
We did Cosplay Judge for WCS preliminary of Malaysia then, but then immigration came and finally detained. This time not only 3 Japanese Cosplayers, but one WCS Japan Inc permament member (Pol Roca-san from Spain, not cosplayer) has detained as well. So it is not the incident only for cosplayers anymore. (also I am the member of WCS too)
We already know similar incident has happened in this March in Malaysia, so to prevent in advance, we already confirmed all required points to the organizer, and also the organizer told us they took all required process and organizers are too careful about that as well, but still it happened again…..
Now here I wrote that since I do not want to see anyone who have such experience again in future anymore.
Also we were sad since on some news they reported as if we are not innocent (of course we are released as innocent)….and their news photos are from Malaysian immigration taken for their investigation, which should not be used on the medias, but it was used…..
During detention, we should stay too dirty jail sometimes with handcuffs, where crammed over 200 overstayed people and there were too many big mosquitos/cockroaches/mouses….stayed there for days with no-clean small foods/drinks, without bed & human rights. Strongly I do not want to see further cosplayers to have such experiences so I wrote that.
I know so far Malaysia used to be great and safety for international guests too, but just right now it is not. We should wait until the timing it will be better.
Now I quickly wrote that because I truly appreticate to all Organizers, Japanese/Spanish Embassy, WCS Inc. and all dear friends who helped us lots during our detention, and also feel thankful to all the friends who worried us about that, it relieved me lots too….!! My dear friends must know that I never wrote such kind of posts so far on SNSs, but this time I received many messages from dear friends with big worry, so finally I wrote this with some important things. I will take enough rest and again, thank you so much. 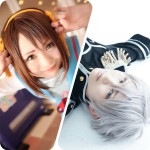 Portrait photo which is for my created fashion bra